Sent to my fav COD streamer because he’s a potato! Great lil gift for laughs! Sent quick and loved the add ons!

Great gift my sister and law loved it It was a big hit!!!!!!

Turned out perfect! My friend loved it.

Sent one to my husband as an inside joke. Perfect delivery. Worth every penny.

Great for sending to family and friends who live far away. Customer servie was promt and helpful.

C
Mail A Potato Face Cousin Who Sends Potatoes
Fresh potato with my face on it!

I ordered a potato with my face on it to be delivered to my cousin. It was awesome! It shipped immediately, arrived promptly, and made lots of laughs. 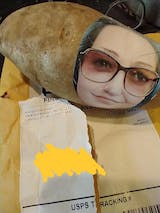 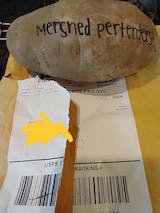 It was for my daughter’s birthday. It did exactly what I wanted it to do.

On Tuesday, March 29th I ordered a potato from Anonymous Potato for my moms birthday on April 11th and had this random couple’s picture printed on the potato (thanks Google for the random “middle aged couple” image) with a note saying “Happy Birthday Jeanette. Miss you. Tell Eddie hello.” and I signed it with random names I picked “Paul and Jeannie”. See, I expected the order to take 2 weeks or so to get delivered. Much to my surprise I get an email on Wednesday, March 30th (the day after ordering) that my shipment was on the way. Then, Friday April 1st (April Fools Day), the tater had been delivered. Let me just say this was like two gifts and one. My mom was so confused by this random couple she didn’t know that was sending her a potato for her birthday. To her home address! But she absolutely loved it and even text me a photo with the potato in her lap like a little lap dog and said “I don’t know these people but best gift ever. I love my potato.” She told everyone she knew and even asked around if anyone knew these people. This went on until her birthday on April 11 when I came clean and sent her screenshots of my order confirmation showing it was me that ordered the potato.

I shared my experience on Facebook and in a group chat with my coworkers and everyone got a good laugh. Turns out one of my coworkers birthdays was coming up. When I told her about my mom‘s potato she responded “who would send a potato and why? That’s so silly.” So obviously my work team sent her a potato for her birthday. When she got it she said I get it now this was such a joy to open.” 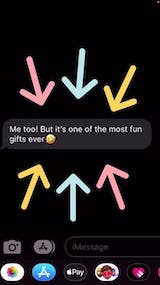 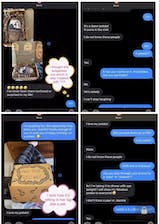 That’s what my friend said when they opened their potato. Lots of laughs. Definitely worth the purchase.

“This is the best birthday gift ever, I’m never getting rid of it” was the response from my friend when they opened their potato. So worth it. So much fun!

My brother loved the gift, he thought it was hilarious.

Turned out great. Thanks!

I had been wanting to send someone a potato for a while, so when my best friend’s birthday came around I knew it was the right time. It came a day or two after her birthday, and she sent me some hysterical messages and ultimately loved it. I think mostly for the surprise factor - and there is a lot to be said for a good surprise. It was one hundred percent worth it, 10 stars out of five, and I can’t wait to send another.

My brother laughed harder than I’ve heard him laugh in 4 years.

A
Mail A Potato Face Anna Deese
So much fun!

So easy to do and my niece LOVED the surprise. Hilarious gift!

I got a potato and birthday queen sash for my friend. I asked for it to be mailed on a specific date, but those instructions were not followed, so she got the present several weeks early. She still loved it, but I was a little disappointed by the timing issue.

I thought it was hilarious. The recipient didn’t. He was annoyed. Which made it even funnier to me.

It was just a printed picture and written in sharpie. Nothing you couldn’t do yourself. However - would you ever? No. You wouldn’t do it yourself. Packaged well. I mean cmon- it’s a mailed potato. Hilarious. 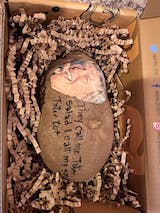 Mission accomplished, I got a good laugh out of giving this gift, however, the photo looked like my 5 year old modged podged a photo to a potato. It had a wrinkle or two in it and it really didn't look like the samples on the website (see photo). However, it is a real potato, so hard to get a flat spot, I get it. I would do it again, but I just won't expect much for the quality...the main point was to get a good rise out of the person I sent it to and that certainly happened!

The homie opened that ish up and was like "bruuuuuh". Nuff said.