These stickers are printed on durable, high opacity adhesive vinyl which makes them perfect for regular use, as well as for covering other stickers or paint. The high-quality vinyl ensures there are no bubbles when applying the stickers.• High opacity film that’s impossible to see through• Fast and easy bubble-free application• Durable vinyl, perfect for indoor use• 95µ densityDon't forget to clean the surface before applying the sticker. Hilariously mail a potato to anyone in the US!

Schedule Your Order To Arrive At The Perfect Time

My goal of sending a gift that would not cause clutter was met tenfold with the unknown spud. My sister who had a shoulder replacement surgery was bamboozled and beguiled. She couldn’t put any of the clues together to figure out who sent it even as I clearly stated the same phrasing as was on the potato. “You are my favorite” went right over her head. Maybe it was the drugs. But what I do know is the wish that she healed quickly and reach the goal of throwing the potato was a fine one to put in her head. She even took her potato to her rehab therapy to show and tell. Yes, I’ll say all my goals were met and she still has her goal of throwing the potato with a completely healed shoulder. Thank you Anonymous Potato for being there for me.
Happy trails. 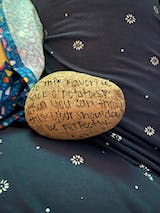 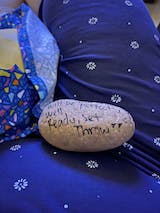 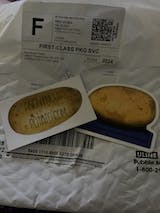 L
Lisa Lewis
So much fun!

The potato got wet and the ink ran. It made it even better that it was so warped. We laughed like crazy!